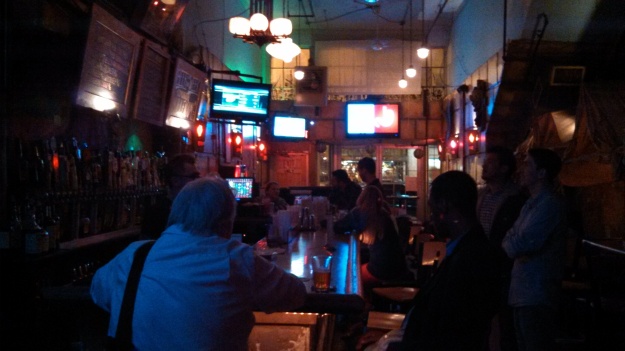 In DC, bars and restaurants who want to serve booze must first obtain a liquor license from the Alcohol Beverage Regulation Administration (ABRA). This post is a primer on the different types of licenses and special endorsements that are required.

To sell alcohol for drinking on-site, a bar/restaurant can get a restaurant, tavern, or nightclub license. Although some spots get a “D” license that allows the sale of beer and wine only (Dacha Beer Garden is a notable example), the overwhelming majority have “C” licenses that allow liquor to be sold too. The differences between these kinds of licenses are explained further below.

Most spots, even places that seem more a place to drink than eat (e.g. Front Page, The Ugly Mug), have a restaurant liquor license. Although this is the most common type of on-premises license, this is not necessarily the most coveted. Why? There are a host of restrictions for restaurant license holders, including:

To certify their food sales, restaurant license holders must file quarterly statements detailing their sales and expenses; new bars/restaurant often get dinged and fined for failing to do so. Still, much to the chagrin of some neighbors, bars who don’t meet the food requirements rarely actually get their liquor licenses revoked; instead, there’s a grace period and ABRA routinely issues warnings and issues fines.

Tavern license holders (often traditional bars, though they include places like Cava and Bistro D’oc who could easily qualify as restaurants) are hampered by much fewer restrictions. They don’t even have to serve food and they can have a dance floor of 140 square feet or smaller without getting an entertainment endorsement.

DC’s 40 or so nightclub license holders (which include clubs like Midtown, Ultrabar) have very few restrictions and can have entertainment, dancing, or charge a cover without getting permission. Strip clubs and big music spots like DC9 often have nightclub licenses too. New nightclubs are prohibited in many parts of DC.

Bars/restaurants who want to offer entertainment and serve drinks outside (either on patio or rooftop/deck) must obtain additional permission in order to do so.

Entertainment endorsements were recently an issue in the recently-modified Adams Morgan liquor license moratorium. The local neighborhood ANC requested that ABRA prohibit new entertainment endorsements so restaurants could not morph into nightclubs. ABRA refused to impose this prohibition, instead declaring they will continue to scrutinize requests on a case-by-case basis.

Entertainment endorsements are an extra 20% of the liquor license annual fee.

To serve alcohol outside, a bar must get a $75 sidewalk cafe (for patios along the sidewalk in public space-DC actually owns many restaurant patio spaces) or summer garden (private space, like a roof deck) endorsement. These endorsements are often opposed by neighbors due to noise issues and often lead to settlement agreements limiting the hours of operation for outside space (for example, on 17th Street in Dupont, patios typically close at 11p on weekdays, and midnight on weekends).

A list of all DC liquor license holders can be found here, while ABRA has more details on the liquor licensing process. Stay tuned for another post on the application/protest process.