Despite only being announced less than 48 hours beforehand, Friday’s Barred in DC Shrawl, a bar crawl of 4 new spots in the Shaw neighborhood, was quite successful.  Around 15 crawlers joined Barred in DC to check out these new bars along 7th Street NW, all less than 6 weeks old, for the first time. Contributing to the buzz was Fritz Hahn’s article in the Post about a DIY Shaw bar crawl that coincidentally came out the afternoon after the Shrawl was announced and featured the same exact four stops (Fritz later gave the heads up to his Twitter followers about the event, very cool). Thanks also to the 20+ Tweeters who tweeted or RT’d out details of the Shrawl, and to U Street Buzz for creating a logo for the event out of nowhere.  It was great times and hope everyone can make the next Barred in DC bar crawl!

Some details and pictures of the Shrawl below:

First stop was Ivy and Coney, a new cash-only neighborhood dive from the Kangaroo Boxing Club owners at 7th and Q. This second-floor walk-up is tiny, not much bigger than my 650 square foot condo. The Chicago/Detroit theme is pervasive, with fake autographed pictures, murals and the limited drink/food menu styled as a Wrigley Field scoreboard. I was excited to order a Vernor’s Ginger Soda (popular in Michigan, where I went to law school) and gin (a “Vergin”); I was given a bottle of Vernor’s to mix with a glass of gin-definitely worth trying out if you haven’t before.  I also sampled a shot of Malort, much to the surprise of several of the friendly people sitting at the bar (“You’re so brave”). Verdict: not so bad, especially if you like absinthe;ask for a chaser of ginger ale.  The selection of beer includes a few cheap $3 cans (e.g Stroh’s) and a few $6 drafts (Bell’s Two Hearted); all liquor is $6 (limited selection of liquor can be seen behind the bar). You can also grab a Chicago or Coney hot dog if you’re hungry. Despite the cash-only policy, some bargoers were taking advantage of an old-school bar tab policy; leave your driver’s license with the bartender and you can run a tab to settle up at the end of the night.  Be sure to check out the cozy back room; another TV with an Nintendo can be found here. Although some of the Shrawlers weren’t a huge fan of the limited selection, cash-only policy and crowded scene, I hope to check it out again on a less-crowded weeknight or for a Chicago or Michigan sports event in the future.

After an hour at Ivy and Coney, the Shrawl ambled up 7th Street a few blocks (encountering an entertaining neighborhood drunk who accompanied us much of the way) to Southern Efficiency, the new Southern whiskey + food spot (one of the triumvirate of adjacent bars from Derek Brown). This place was even smaller than Ivy and Coney, just one room in a brightly lit space. The drinks were a hit here; most of us sampled the white whiskey + smoked cola drink on tap or the Stone Fence cocktail served in a mason jar with a lid. Both were $7 and tasty. A pretty large selection of bourbon and Southern beers somewhat unique to the area were also on the menu.  A tip-the door to the back leads to the bathrooms shared by Eat the Rich; if you want to also try some oysters or the cocktails-by-the-pitcher next door, it would be very easy to do so. Looking forward to coming back to checking these places out, along with the sherry spot Mockingbird Hill, to complete the Derek Brown Bar Crawl. 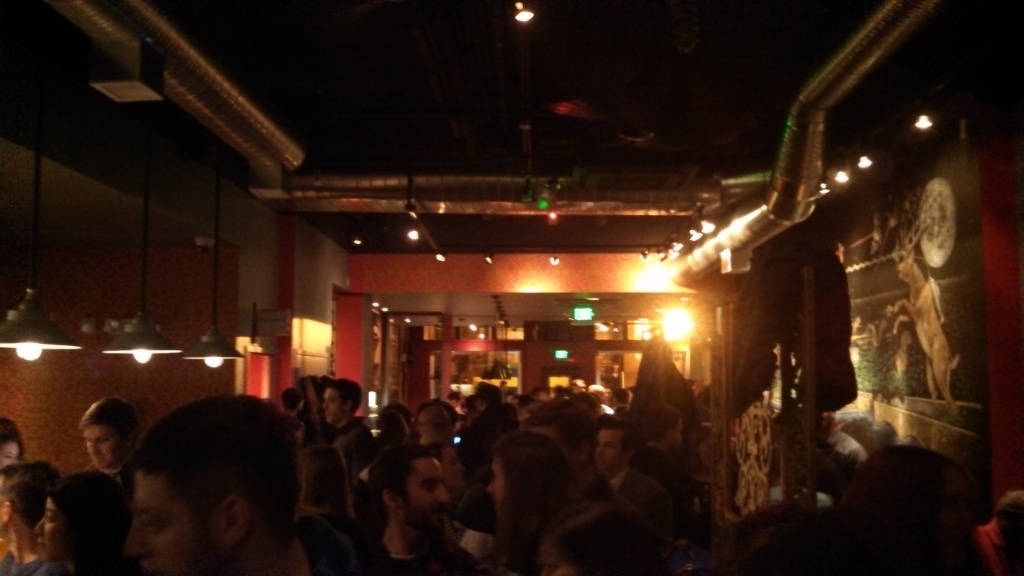 We then proceeded around the corner on T Street to the third stop of the Shrawl-Right Proper Brewing Company. Quite a departure from the first two spots, Right Proper occupies an expansive space with multiple bars. Well-priced ($4-6) beers made in-house can be had here; I tried The Duke and a honey beer (The Bees Made Honey In The Lion’s Skull) that were both very good. We also sampled some onion strings; I’ve heard the fried chicken sandwich is also worth having. The reaction from the Shrawlers was fairly divided; everyone enjoyed the beer (even those non-beer fans among us), but some thought the place was too sprawling and somewhat antiseptic while others (like myself) felt Right Proper nailed the brewpub concept quite well. One tip-Right Proper was still buzzing when we left around 12:30, with no signs of closing down, well past the midnight posted closing time, so feel free to come late.

The final stop of the night, just steps away across 7th Street from Right Proper, All Souls Corner Bar was a solid conclusion to the Shrawl. Similar to the first two bars, All Souls is another cozy spot; the sole room contains a large curved bar (originally from Jaleo, where the owner once worked). I liked the lighting and the low-key vibe of this spot. The drink list is short yet solid; a number of wines (the owner is a big fan of sparkling wine), beers and three $9-11 cocktails (numbered #1, #2, & #3), along with the All Souls combo (a glass of Rose + shot of Maker’s). The Barcelona sidecar (with cava) was terrific. Definitely coming back soon.

Published by Barred in DC

View all posts by Barred in DC