Signage with info on Tap Takeover at Scion

DC’s best brewery, 3 Stars Brewing Company (not just according to me-see the City Paper’s nod), hopes to finally release its first bottled beer in the next 4-6 weeks. This is one of the many tidbits Barred in DC learned while chatting with the brewers at the recent Tap Takeover hosted by the Dupont restaurant Scion. Ten beers from 3 Stars were offered ($4-4.50 during HH, $8-9 afterwards); Barred in DC was able to sample seven (whoa! on a school night, no less) of them over the course of the evening. All were great (tasting notes about these beers at the end of this post). We also snagged some swag including a t-shirt and a mesh cap.

Two of the beers sampled

We chatted at length with co-owner Dave Coleman, who shared the news about the bottles; the first beer may be one of its darker beers such as the Pandemic Porter or the Southern Belle brown ale. They’ll be large-format beers (750 mL) and likely be topped with corks and cages. The bottles will be first offered only to members of its beer club (Illuminati Reserve Society), and may be offered to public afterwards (let’s hope!). Later, a tallboy can of the incredible Citra & Lemon Peel Saison may be canned. 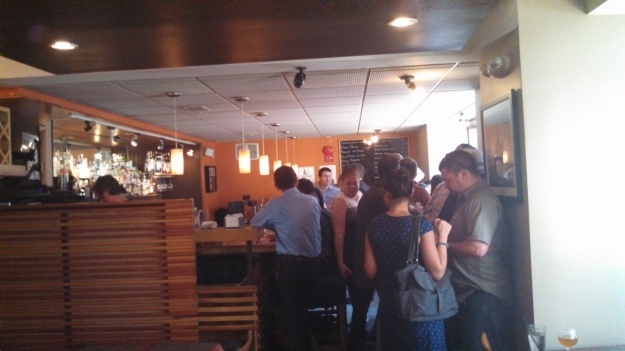 Dave also spoke at length about the benefit of collaborations with other brewers or restaurants (as several of those on tap were): they’re fun to do, help spread the hard labor around (often cutting the brew day in half), and provide new brewers a kick-start before they can set up their own equipment (3 Stars worked with Evolution and Oliver Ales in collaborations before releasing its own stuff). Currently, 3 Stars is doing a cool collaboration with Pizzeria Paradiso inspired by the great writer/thinker Dante. This 9 part series has already kicked off (the first one was The Moon-featured at the Tap Takeover; next up is Mercury-both inspired by Dante’s Paradiso). The goal is to culminate with a college lecture.

Posted up at the bar

The folks from 3 Stars were very friendly; Dave also shared an amusing story (ask him) on how 3 Stars monitors social media, including the popular Untappd app, has evolved over the past few years they have been in business. We had a great time and highly recommend that you make to one of the many events Scion hosts (always a good crowd, but never so packed you can’t move).

Some notes of each of the beers we sampled in pints, snifters, tulips, pints & smaller snifters: