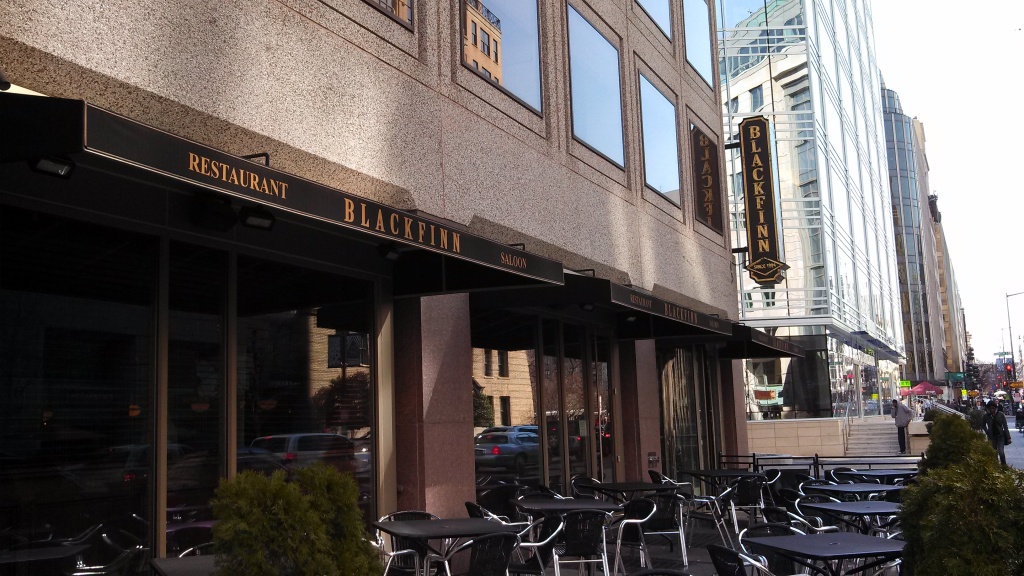 Unlike most non-lounge/club bars in downtown DC (which really doesn’t exist as a neighborhood, but it’s roughly between 11th and 21st streets between E and L Streets for the purposes of Barredindc), BlackFinn draws a solid crowd for both weekday happy hour and on weekend nights. This faintly upscale standard spot, which has other locations in Bethesda and elsewhere around the country, opened in fall 2009.

Decent-sized patio (see pic above) fronts the traffic of I Street, though you can spot the greenery of Farragut Square catty-corner. Somewhat bizarre revolving doors allows you entry into the bar, which splits into three areas: one long bar on the right with high table tops and several booths (see below pic), a fairly small dining area on the left which is inevitably empty on weekends and late nights, and another bar in the back where tables are often pushed to the side for a dance floor on weekends (see pic further below).  Lots of brown wood in this spot.

With a number of tvs, this is a decent spot to get away from the office to watch a mid-day soccer match or conference basketball game, though not the best place on weekends, (despite being my alma mater UVa’s DC watch location) especially late evenings when they switch to the DJ and clear out tables for dancing and meat marketing. The bargoers on weekends are decidedly different than the rest of the week, a surprisingly attractive rowdyish crowd (with your fair share of VA folks since it’s so close to the Orange/Blue Line) that makes the place feel like a less-crowded SOTW or Madhatter.

There’s nothing particularly unique (remember it’s part of a chain) about this bar itself, but I do give them points for having Dogfish Head and DC Brau on tap.