Overlooking the Verizon Center, Redline satisfies those looking for both a sports bar and a loungey atmosphere. Dubbed a “Gastrolounge/Bar,” this is a solid spot to grab very good food and drinks before or after a game or concert, or if you’re just in the neighborhood. Unlike most of the neighboring establishments, Redline’s second-floor location and large windows provide good views of the throngs below and let in lots of light during the day. The antithesis of Rocket Bar, let us count the ways…

Three main areas make up this second-floor establishment that features much-coveted exposed brick walls: a dining area of tabletops and booths (with table taps-more details below); a cozy bar area to the right of the steps at the entrance (quite popular for Caps fans before games); and another larger bar area beyond the dining room. 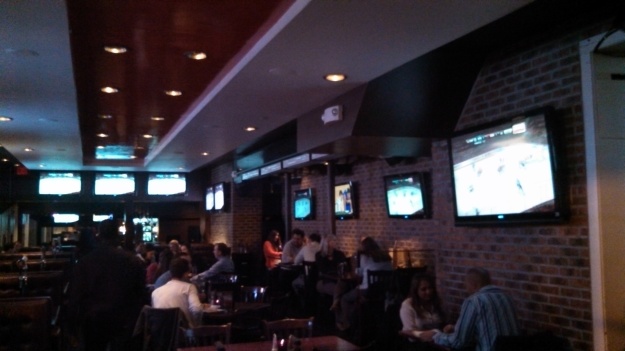 Around 50 TVs are posted throughout Redline, allowing people to watch their favorite games from any angle. A huge 11-foot projection screen and a sports news/scores ticker are prominent and can be checked from a number of tabletops and booths throughout the bar.

Most unique are the aforementioned built-in beer taps installed at several booths in the dining area allowing patrons to self-serve their brew of choice. Redline is only one of two spots in town to feature such table taps (Meridian Pint is the other). But, amateur bartenders, Beware! It’s not as easy as it looks and the electronic meter on the tap tracks how many ounces you pour, so charges can rack up quickly. Also, if multiple booths are open, peruse the beer selections at each station as  some tables have more adventurous beers than others. So, match your mood from Bud Light to Sam Adams.

Pouring own beer! Also, some of the great food served.

Barred in DC was recently invited by Redline to enjoy drinks and the great, inventive food (gator and a kobe beef hot dog are on the menu) and also previewed its new buffet brunch, which offers an immensely impressive spread from 10a-4p on Sundays ($25 + $10 for bottomless mimosas). As for the drinks, a solid 20+ $6-7 bottle beer list and a serviceable draft list are accompanied by a host of wines, shooters, and cocktails.

Another view of main bar area

Unlike most sports bars, bottle service is available here and a DJ spins tunes weekend nights. In other words, those looking for a traditional sports bar with tons of sports paraphernalia and game broadcast sound routinely on and audible would probably prefer another place. Folks who want a nicer atmosphere or want to enjoy exceptional, not your average, “bar food” and drinks with others non-fanatics should check out Redline. 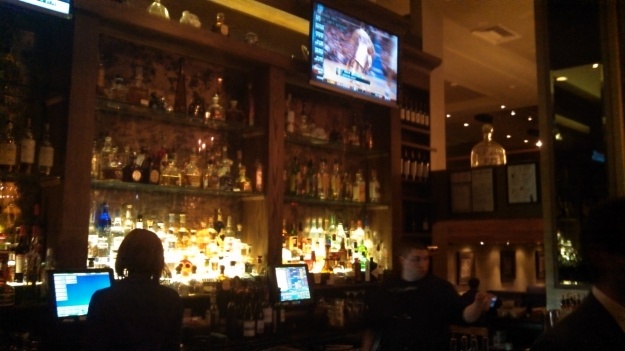