Sunny San Diego was anything but on a recent trip my wife and I took over a long weekend in February, but after exploring great spots in new neighborhoods-along with old favorites-and sampling 30+ beers and endless fish tacos, we quickly forgot the rare gray skies. The last time I had visited the area in 2008, my idea of a craft beer was a Heineken, so when our hosts showed us some great spots offering a huge variety of local brews, we embraced the craft beer mecca that is San Diego. Most beers were around $6 and 4 oz tasters were often $2 or so and beer flights were ubiquitous. This post recaps the places we visited and many of the beers we had; I’ve sorted them by neighborhood so you can plan your own trip to San Diego (#3 seed in U.S. cities for me) 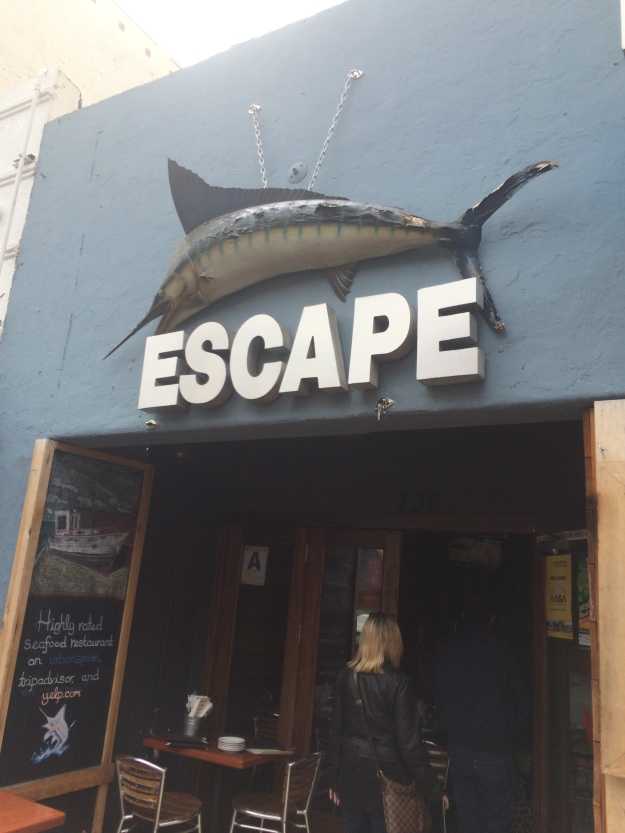 Since we were based in downtown at the Westin San Diego Gaslamp Quarter (910 Broadway Cir), we spent time exploring the very walkable urban neighborhood comprising blocks of brick sidewalks and historic low rise buildings of the Gaslamp Quarter. Lunch, thanks to rave Yelp reviews, was at Escape Fish Bar (738 5th Ave.-at F). Two huge, delicious swordfish tacones (sort of a fusion between a fish taco and a Japanese hand roll) were only $12 for lunch. Great happy hour specials ran from opening until 6pm, including $4 craft beer and cheap wine and cocktails. I had pints of Black Market Hefeweizen (est. 2007, Temecula, CA, about 1 hour north of SD) and Coronado Orange Avenue Wit (est. 1996, San Diego) while enjoying a break in the clouds on the restaurant’s patio (plenty of others enjoyed the day drinking opportunities in the vicinity). After eating, we continued the great people-watching and window shopping by strolling through the neighborhood, visiting a few cool shops (my wife found some great clothing deals at Dolcetti Boutique – 635 5th Ave. and we tried some headware at the Goorin Bros. Hat Shop – 631 5th Ave.) in old century-old buildings. For a more traditional mall-experience, the outdoor shopping center Horton Plaza is adjacent to the Westin.

When we returned to the streets later that night, it felt like a completely different neighborhood. Scores of debaucherous bachelor/bachelorette/birthday celebrations swarmed the streets and/or waited in massive lines for bro-tastic bars/clubs. We squeezed through the crowds, gawking at the Bourbon Street-like scenes, and chilled out at the edge of the neighborhood near its border with the adjacent East Village. Although not a bar, we made a quick stop at the Double Standard Italian Kitchenetta & Bar (695 6th Ave. at G) right before last call. Interestingly, the modern, bright spot on the ground floor of a newish apartment building does not have a full bar; instead along with a full selection of beer and wine, cocktails (such as a mojito) poured from pre-made pitchers/bottles were available. I had myself a pint of AleSmith Pale Ale (est. 1995, San Diego). We then strolled down the street to the legendary (for SD) Neighborhood (777 G St.), a low-key, dimly-lit hipstery spot with an amazing beer list. A hidden popular speakeasy (Noble Experiment) is behind a false wall of kegs; it was full when we stopped by around midnight on a Saturday. I had myself a pint of Coronado Mermaid’s Red Ale to close out the evening. A fun touch was the mini-guest book that accompanies each bill; past customers had scribbled notes and drawings (there are apparently limitless ways in which to draw penises), inviting the customer to do the same (this was not the only spot in San Diego that added this whimsical nightcap).

Fun mini guestbooks each check comes in at Neighborhood

A few blocks west of Gaslamp Quarter is the Marina district on the San Diego Bay Harbour. Our hosts took us to dinner at one of their new favorite spots, Puesto Mexican, located in the recently opened The Headquarters at Seaport District complex. This Spanish mission inspired edifice served as the San Diego Police Department’s headquarters from 1939-1987 before recently undergoing a $40 million renovation to refashion it for more pleasant uses. Puesto focuses on serving Mexican street foods in a striking airy, arty bi-level space; we enjoyed more fish tacos (and some that contained other fillings), along with their wide variety of margaritas and micheladas (beer/tequila cocktails).

Little Italy
Just north of downtown is the neighborhood of Little Italy, with many Italian shops and restaurants. We did have lunch, just minutes after leaving the very-close-to-downtown San Diego airport, at the gastropub Craft & Commerce (675 W. Beech St.), located near the Little Italy/Downtown border. Outside, on comfortable picnic tables, we scarfed down the first of the many awesome fish tacos that we ate on this trip, while I sampled the Green Flash 30th Street Pale Ale (est. 2002, San Diego)-the only Green Flash beer I drank on the trip (somewhat surprising due to their popularity). The interior of the establishment had some cool stylistic touches, such as bookshelves stocked with books and taxidermy. Be forewarned-the establishment does not offer vodka or ketchup.

Sunday evening, we made our way to one of the craft beer community’s favorite breweries, Ballast Point Brewing Co. (2215 India St.) (est. 1996, San Diego) which has a spacious brewpub in Little Italy (a brewpub with some beers made on site separate from the main location is a common occurrence in San Diego). Ballast is renowned for its world-class Sculpin IPA, along with variants such as the Grapefruit Sculpin and Habanero Sculpin. Good setup for ordering food and drink–order food at a cashier while patrons can either order beer at designated stations at the bar or from roving servers. Definitely worth checking out. 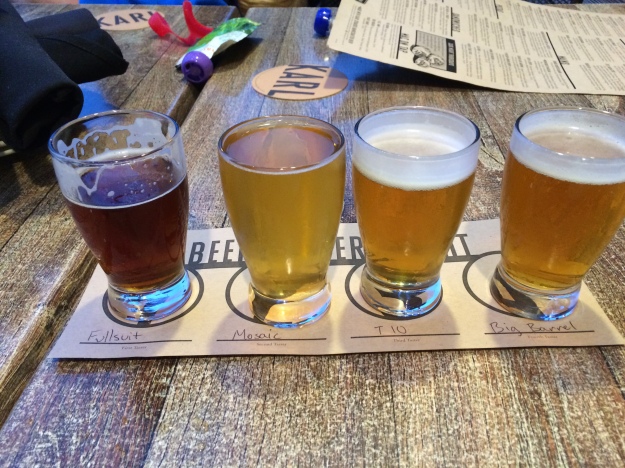 The tony La Jolla neighborhood about 20 minutes up the 5 features a beautiful vista of the Pacific Ocean and the La Jolla cove. The cove is famous for its lounging seals and birds, while the surroundings tree-lined streets are full of high-end shops. We walked alongside the cliffs near sunset before enjoying happy hour at the local outpost of Karl Strauss Brewing Co. (1044 Wall Street, La Jolla, CA). Self-described as San Diego’s original microbrewery, Karl Strauss opened in 1989 and isn’t well known outside California-for good reason, as it is only distributes inside the country’s most populous state. We sampled many beers on the patio through a couple flights that included the Mosaic Session Ale, Tower 10 IPA, Fullsuit Belgian Brown Ale (tremendous) and Big Barrel Double IPA.

Friday evening, our hosts took us to a new-to-me-neighborhood of North Park. This charming, walkable area, centered around 30th Street and University Boulevard skews more hisptery but is much more low-key than the Gaslamp Quarter. Before dinner, we made a quick visit to awesomely-named Modern Times Flavor Dome (3000 Upas St.), one of two San Diego tap rooms for Modern Times Beer (est. 2013, San Diego), which had some of the best beer I quaffed on the trip and is notable for not brewing any IPAs. This super-chill spot, with rows of bar-height communal tables, offered its own brewed coffee and 16 beer taps (and growler koozies). I sampled the Lomaland (great saison), Black House Nitro (oatmeal coffee stout) and the Universal Friend (saison/farmhouse ale). 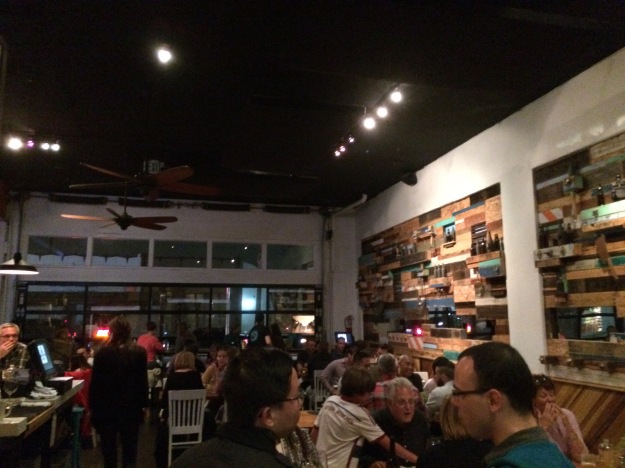 Next, we made our way several blocks to the north for dinner at Waypoint Public (3794 30th St.). This buzzy spot had a terrific beer selection (30 taps or so) and great food; it also is the most-kid friendly bar I’ve ever been to–a large kid’s play area makes up one corner of the bar. While having dinner with our hosts (and their one year old son–more on that later) I had a solid beer from Mother Earth Brew. Co Boo Koo IPA (est. 2008, in Vista, CA about 40 min north of San Diego), not to be confused with Mother Earth Brewing from North Carolina. After dinner, entranced by loud hip hop music and a hip looking crowd, we stopped by a hip sunglass shop, 9Five (3778 30th St.); apparently a rapper from Fresno dropped an album that week and folks were celebrating. 15 minutes later after downing a red solo cup full of warm Skyy vodka and cranberry juice and trying on some expensive shades, we went up the main drag to the Coin-Op Game Room (3926 30th St.), a divey spot jam-packed with people (apparently folks in San Diego don’t wait until 11 or after to go to bars like they do on the East Coast) and old-school arcade games, including a number on the patio in the back. After losing tons of quarters playing some games from the 80s and 90s, we had a dessert nightcap at Heaven Sent Desserts (3001 University Ave.)–the strawberry shortcake and chocolate trinity slices of cake were awesome and lasted us the rest of the trip. A 15 minute $8 Uber ride took us home to the hotel.

The trip’s beer highlight happened to coincide with a one year old’s birthday party. What?? Yep, the birthday party was held at the Stone Brewing World Bistro & Garden – Liberty Station (2816 Historic Decatur Rd. #116) in Point Loma close to the airport. This brewpub features beer from Stone Brewing (est. 1996, Escondido, CA about 30 minutes north), one of the largest/best craft breweries in the U.S. and takes up over 23,000 square feet in the former Naval Training Center (it reportedly cost $8 million to build). One of the more dramatic dining areas is actually in the former mess hall. There we had some terrific food including oxtail wings and ahi fish tacos (of course), and shared several flights of beer (I sampled around 12 beers -the sheer amount of Untappd check-ins caused a friend to question if I was still alive). One of the most interesting was the Baird/Ishii/Stone Japanese Green Tea IPA, which uniquely stood out from all the great IPAs on tap. Also in the massive complex was a Stone Company Store, which offered merchandise and even kegs. Unfortunately, due to the rainy weather we weren’t able to hang out in the massive gardens and play bocce, but this location is definitely worth a trip for folks staying close to downtown.

Later that afternoon we went to one of San Diego’s most charming neighborhoods, Coronado Island (technically not an island, but you do have to cross a dramatic bridge to get over there). We explored the historic, grand old Hotel del Coronado (The Del, as it’s known by the locals) and strolled down the promenade along the Pacific Ocean. The hotel, which dates from the 1880s, is most famous for being the hotel where much of the hilarious comedy classic Some Like it Hot was filmed. We had a quick drink at the unsurprisingly pricey San Diego Babcock & Story Bar ($8.50 beers and $15+ cocktails) before hightailing it back to the mainland. 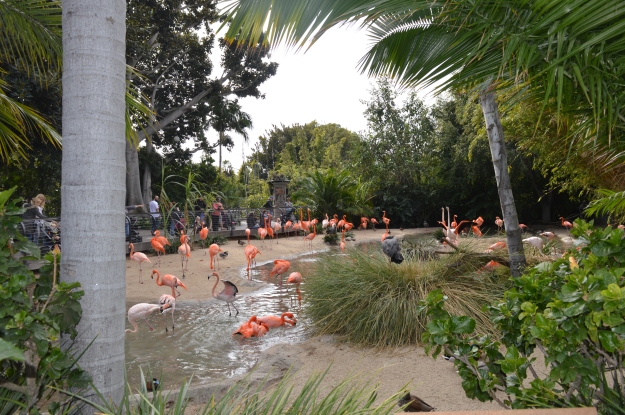 Finally, a trip to San Diego is not complete without a visit to the world’s most famous animal showcase, the San Diego Zoo. A pricey-but-worth-it sight ($48/each), we spent several hours checking lions, tigers, and bears oh my in a lush, naturalistic environment. The admission included an informative and entertainingly cheesy singing bus driver (All About That Bass turned into All About This Bus), a soaring gondola ride, and very active panda bears (and tons and tons of kids). I did do some day-zoo-drinking with a $8.50 Karl Strauss Red Trolley Ale, while my wife had a cheaper airplane bottle of wine. We didn’t have a car, but the Uber was only about $5-6 each way from downtown.

All-in-all, San Diego is a treat for any beer lovers (especially those fans of IPA) and those who enjoy a laid back time.