Astoria (1521 17th St. NW (b/t Q & P), 5p-2a Sun-Th, 5p-3a Mon, Instagram, Washingtonian), from Devin Gong and the folks that brought you the great cocktail + bao/dumplings/skewers H Street spot, Copycat Co., opened Wednesday, April 24th (as first reported by PoPville). This 17th Street spot, in the long-vacant space between JR’s and Agora, focuses on Sichuan food and cocktails. Surprisingly, there has been a dearth of media/PR-driven hype about this spot, despite the awesomeness of Copycat. Only the Washington Business Journal contributed any original reporting on this spot, and that was back in April 2018 (Note: Washingtonian posted a more legit opening article a few hours after this was published.  So Barred in DC swung by its first Friday in operation for a first look. In short, this place, really a fancier version of Copycat with more significant food options, is tremendous, and there may be nothing set up like it in DC.

The drink menu is comprised almost entirely $14 cocktails. Like Copycat, the base menu consists of classic cocktails (Bourbon Smash, Caipirinha, Moscow Mule, Old Fashioned, Daiquris/Gimlets, Painkiller) with “Suggestions” for variations. When I visited there was an additional seven cocktails that were featured (presumably rotating on a regular basis). I got the Banana Painkiller (featured) plus a Boulevard Smash (bourbon smash with campari). Many of the drinks come in For those that prefer something cheaper to drink, $6 TsingTao and PBR cans, $8 3 Stars, and $14 Brooklyn or Anderson Valley Boont Amber (large format presumably), along with $12 wine by glass options were also available. 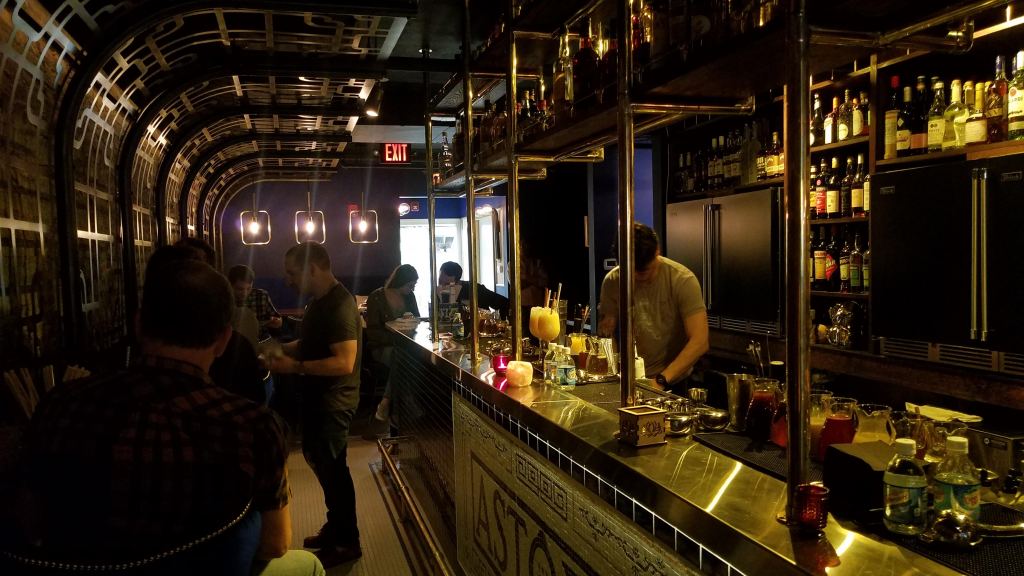 For the Sichuan cuisine (spicy, though some items are not traditional), 12 items (all $14) are available. Some are labeled as a “snack”, while many are labeled as a “dish” (which I think means it’s a bigger portion). The items included Dan Dan noodles, chili wonton, chimichurri, water boiled beef la-zi chicken, ma po tofu, sweet & sour ribs, walnut shrimp, veggie triple delight, basil eggplant, pork fried rice, and sober soup (borrowed from Copycat). The menu suggests 1 per person for a snack, 2 for a meal, and 3 if you’re really hungry. We had dan dan noodles, chili wonton (small size), and water boiled beef (good size). The place isn’t cheap (split a dish and 4 cocktails with Mrs. Barred and spent around $90) but it will definitely be popular.

Space-wise, the very narrow establishment (sits maybe 50 people) greets patrons with a host at the door (who manages seating for the tables) and a bright, airy nook for waiting or posting up front for drinks. Around 5-6 deep blue, plush booths (4 or 6 seats) make up the first half of the establishment. A long, copper (or gold?) topped bar then extends back towards the rear (with shelving on top with bottles). This is where things get really interesting-aside from 2 stools at either end, there are NO seats directly at the bar. Instead, along the wall, pairs of stools face each other (with a table/rail running the length of the wall with bump outs for the table). When the place isn’t super busy, you still can talk to and order from the bartender, even though they are like 6 feet away. At other times when people are actually standing at the bar ordering, servers or other staff take orders (one snag so far is that it hard to figure out who exactly to order from which resulted in dropped orders for some in our group). Finally, in the back there are a couple more tables (including ones that fit a ton of people and/or are communal). Make sure you check out the ornate AF bathrooms when you visit. A 25-seat patio apparently awaits soon.

Also, the name: Astoria. A staffer told me that one of the owners if from New York, and the name is a homage to the famous bar at the Waldorf Astoria hotel as the bar was meant to be evocative of it. 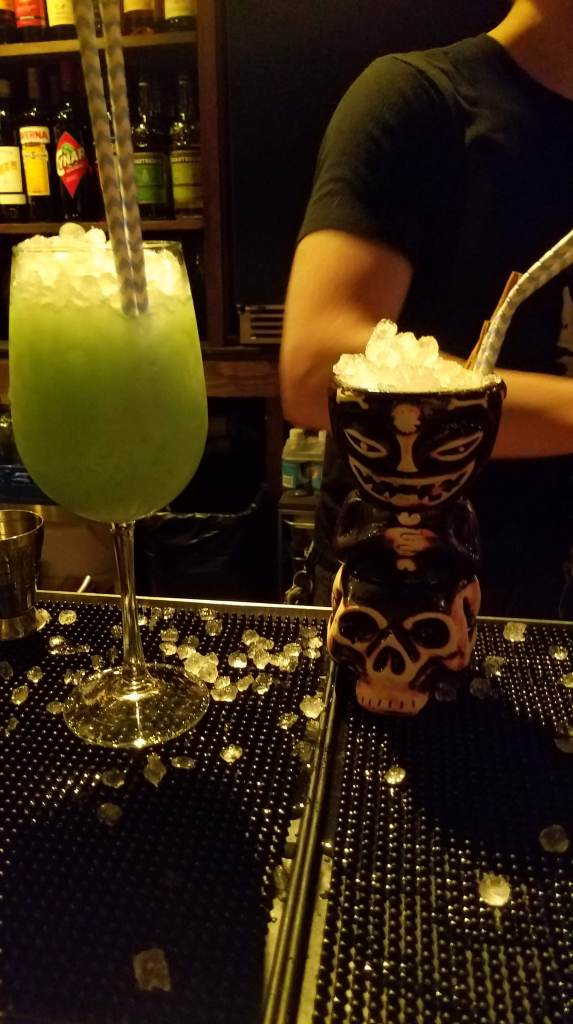 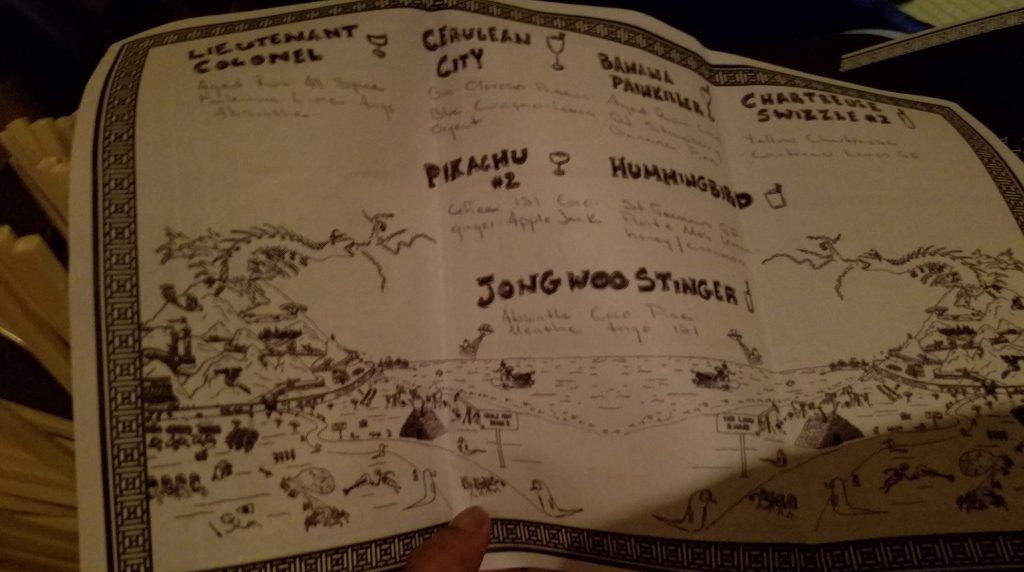 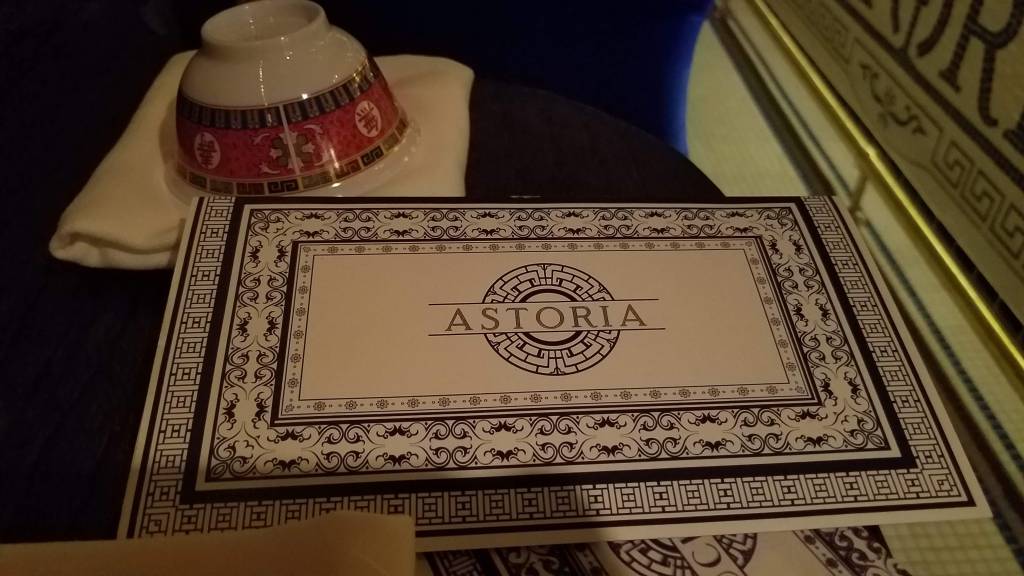 One response to “Astoria Comes to 17th Street in Dupont”