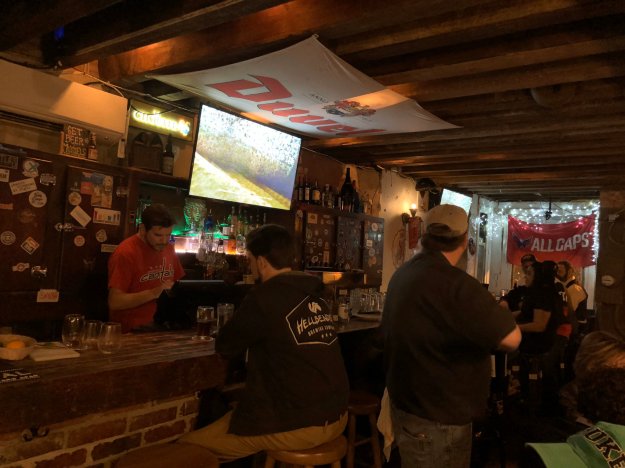 Granville Moore’s was one of the last spots Mrs. Barred and I went to before the pandemic. This is from March 4, 2020. 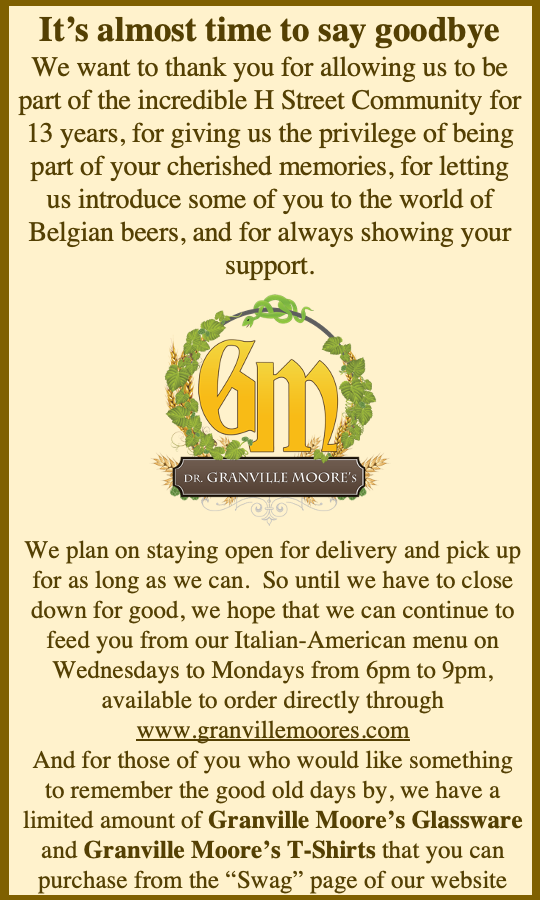 We think we will have to shut down … for good by the end of this month…We will keep Granville Moore’s Pasta Place open for as long as we can afford it, but we imagine that will only be for the next few weeks.

The spot originally closed to dine-in with the pandemic-related closures in mid-March. Because its signature moules and frites do not travel well, it reopened in a new format for  take out May 26th as Granville Moore’s Pasta Place. Business was soft when Phases 1 and 2 in DC begun, and by mid-July it had closed again until reopening in early September.  But the sales from takeout/delivery (as well as the “ghost kitchen” Freshly Tossed DC also available on the apps) have not been sufficient to cover basic expenses and it’s costing more money just to be open as the pandemic has hit them very hard. The owners also own the nearby The Queen Vic, which recently opened a patio a few doors down on the Nomad Hookah patio, and will focus on keeping it viable during these impossible times for the hospitality industry in DC.

A source had alerted to me originally on Friday that a real estate agent had posted a listing noting the 1865-square foot, 79 max occupancy space was for rent (see listing below) for $6,217/month (Triple net). Gordon confirmed that they were only 2 years into their lease so they are looking for someone to take over the lease for the great space/location. The listing, appropriately for these times, notes that given its tight size, it would be an “Excellent location for a down-sizing restaurant refocusing on the delivery and app-based food businesses.” 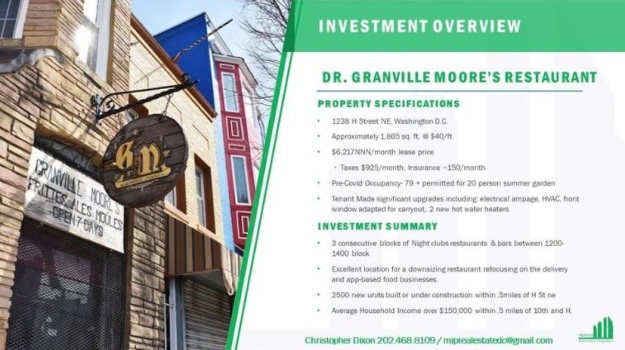 Dr. Granville Moore’s Brickyard opened in August 2007 from the late Joe Englert and managing partner Chris Surrusco. It was one of the first sit-down restaurants of the so-called “Atlas District.” After the opening chef quit after two weeks, Teddy Folkman took over the kitchen, later becoming an owner and dueling victoriously over celebrity Chef Bobby Flay. The folks behind Queen Vic bought it in October 2017, connected with Folkman’s move to South Carolina, where as of this spring he was the “culinary helm of the Timbers Kiawah Ocean Club & Residences, serving as the exclusive food & beverage manager”

The full statement below leaves some sort of possible hope if sales pick up. The Pasta Place is open Tue-Sun 6-9p for pickup/delivery online or via most of the main apps.

Sadly, it’s true.  We think we will have to shut down Granville Moore’s for good by the end of this month.

This pandemic hit us really hard.  People loved Granvillle’s for the moules frites, so not being able to offer them as a take-out option has been catastrophic for us.

We had to change the concept a few months ago in the hopes that the sales from the temporary concept could tide us over to help pay rent, insurance and utilities until we could re-open as Granville Moore’s with the original Belgian menu.

However, the sales from the new concepts have not been high enough to cover even basic expenses and every day we are losing more money and getting more into debt.

If we had more time and resources, I think we could have made it work, but between trying to keep The Vic open, as well as working side jobs to be able to pay our personal bills, we simply don’t have anything left to give to Granville’s.

We are only two years into our lease, so hopefully between the great location, the ABRA license and the equipment, someone else can take over the lease and make a success of it.

We will keep Granville Moore’s Pasta Place open for as long as we can afford it, but we imagine that will only be for the next few weeks.

2 thoughts on “Granville Moore’s To Close”