Crowdsourced via Twitter- best onion rings in DC. Onion straws and other variations not mentioned. 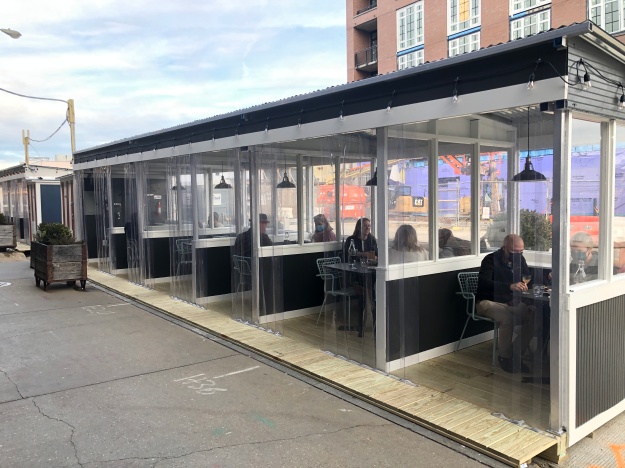 This post has been updated on 1/3 to add more details based on architectural drawings and plans sent to DCRA.

Popular DC restaurants Le Diplomate (14th Street) and St. Anselm (Union Market area) caused a stir on social media this week after opening up nearly identical dining structures in the parking spots in front of the eateries (i.e., “streateries”). The spots are both part of the 20-restaurant STARR Restaurants group (founded by chef Stephen Starr).

The semi-enclosed structures contain multiple partioned stalls, each of which contains one table with chairs serving one party at a time (either 2 or 4 people at a time). Even more striking-each stall has its own electric-powered overhead pendant light as well as a vent providing heat from a central source (each structure has a building (or 2) at the end which contains the heating unit-apparently a condensing gas furnace (possibly this one made by  Payne which costs approxmately $2300) and a 100 gallon propane tank). The 3 walls for each stall are made up of wood going up to waist high with plexiglass above it separating the stalls from one another and the street; the ceiling is metal. The side of each stall that faces the restaurant consists of a several secured semi-rigid plastic strips with a 3 foot or so wide permanent opening for the entrance to the stall (I’ve spotted servers speaking to diners standing outside the entrance).

For more details: I’ve obtained copies of the architectural drawings/blueprints from DCRA for Le Diplomate (1, 2). Multiple permits, including a construction permit and a certificate of occupancy were required from DCRA. I couldn’t locate the ones for St. Anselm but they should be similar. These were designed by Stokes Architecture and Design in Philadelphia.

Although these have more than 2 walls, these structures appear compliant with DC’s indoor dining pause which permits “[e]nclosed outdoor seating structures such as plastic domes or igloos that are intended for individual parties of six (6) guests or fewer.” Because of the partition, parties can be within 6 feet of the party next door and still be compliant with the rules.

These structures did not come cheap; an industry source pegs the cost of the larger structures in front of Le Diplomate on 14th Street at close to $80,000. Another restaurant owner estimated a $75,000-$100,000 cost. However, a construction contract submitted to DCRA shows that it cost $45k and the restaurant owner served as the general contractor, so unclear the discrepancy. Each business received the $6,000 Winter Ready Streatery Grant from DC. But they seem popular and will likely be quite helpful for revenue and employment for staff the the colder months.

Le Diplomate calls their stalls “Streetside Chateus” (owing to its French cuisine) while steakhouse St. Anselm terms them “Streetside Shacks” (not sure this one, it’s a steakhouse though they call themselves a “tavern” hilariously). The 24 Streetside Chateus line both 14th Street (16 stalls seating 48 in 780 square feet) and Q Street NW (8 stalls each seating 4; 32 in all in 480 square feet) in front of the restauarant and are extensive, St. Anselm by comparison has a more modest operation with 12 stalls in 2 structures (stalls alternate seating 2 and 4) with another 6 in a structure still under construction, all on the 5th St NE side, which will seat approximately.

I first learned of the Le Diplomate structures from U Street Buzz and St Anselm from Tommy McFly.

Some wonder why DC didn’t allow similar actual brick and mortar indoor dining in stalls or one party at a time when they’re allowing things like this? Who knows (there was no explanation provided by the city). I speculate that the city may have thought it unfair for it to provide winter-ready streatery grants that helped spots build these structures and ban them; it is easier for investigators to spot and administer since the structures are more easily visible than inside (bright line rule: no eating allowed in the main structure). I know some have been concerned for customers due to lack of ventilation – I have not been – my polling has shown roughly 80% of people who go out are dining with people they already spend time unmasked socially non-distant and I would be extremely surprised if people going to these stalls are already not part of the same household or COVID crew. I do have some concern for staff-Laura Hayes of the CIty Paper documented in detail some of the issues for serving more enclosed spaces-but the forced air heat and the relatively wide permanent opening seemingly mitigates this.

An email and Instagram message sent to Le Diplomate was not responded to by publication.

More pics of St. Anselm’s Streetside Shacks are below

Given the restrictions (including 10 weeks were there was no dine-in at all in DC) imposed to stem the tide of the pandemic have threatened the existence of most restaurants, many people have tried to do their small part and frequently order takeout and/or delivery from local spots, and will continue to do so until it’s over. To get an idea of what people enjoyed the most this inglorious year, on Saturday night (12/26/20), I posed a question on Twitter, “Where was your best takeout/delivery meal from in 2020?”; over 200 people responded, including some from outside the DC area.

I encourage you to take a look at the quote tweets and replies for more details/kudos and all the mentions, but with the help of a follower who compiled the mentions for me, below are the spots that were mentioned multiple times. Almost all of these spots do both takeout and delivery (multiple platforms; most spots that are on DoorDash are also on Caviar and vice versa since share ownership); the platform linked to on their website is listed. Remember to pick-up if possible (calling is almost always an option) and use the preferred delivery platform when not to maximize amount of money that goes to restaurant. For more Barred in DC food guides go here. For food writer picks from Eater go here.

The Italian sandwich (slash sub/hoagie/grinder/hero), depending where you hail) is one of the great American food inventions.  Although DC does not have an extensive Italian-American community (though there were certainly pockets in the early 20th century on Capitol Hill or nearby), you can still get great sandwiches in DC, as detailed below (I’ve included a few suburban sandwich essential spots as well). For more Barred in DC sandwiches go here.  This taste test story from 2017 in Post by Holley Simmons (now flower shop owner) is great too. Rankings are based on a series of Twitter polls (the top 3 were essentially tied)

Name of Italian Sandwich (their most popular version) in Italics. Price with tax. In almost all situations, toppings can be subtracted

All of these are great, but haven’t quite received the recognition due to their location or length of time open. Listed in italics is the name of their most Italian sub.

Other notable in suburbs:

ChiKo on Barracks Row made this list, though it’s a different style than most on the list

Next in the series of Barred in DC food guides is where to find the best Chinese food (or Chinese American food in many instances) in DC.

Again, most of these guides are generated  from an open Twitter threads-they are based on what my Twitter followers believe is the best in the District of Columbia proper rather than my personal experience, as I’ve not had all them. “Alcohol” available doesn’t mean alcohol is necessarily available for pickup/delivery, but generally shows whether it’s more sit-down or not.

Sorted By Neighborhood (including other spots mentioned) 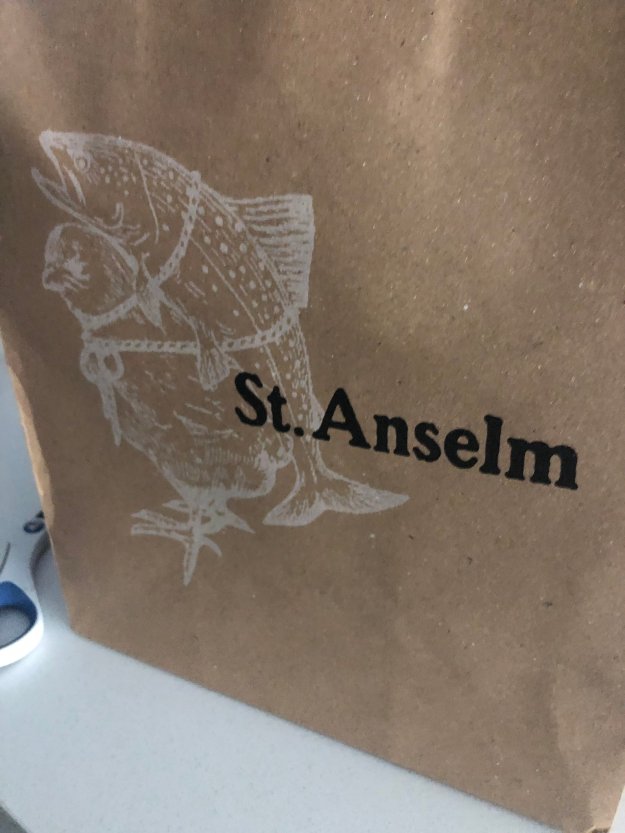 A reader recently asked where the top fancy takeout meals in DC were. I had some ideas but as par for course, I asked everyone on Twitter and got roughly 60 suggestions. Those mentioned multiple times are listed below. Almost all (except where noted) are serving on-site as well (patio for many).

Next Tier of Mentions

[Up-to-date as of March 6th, 2022]
Next in the series of Barred in DC food guides is where to find the best macaroni and cheese (mac ‘n’ cheese) in DC.

Again, most of these guides are generated  from an open Twitter threads-they are based on what my Twitter followers believe is the best in the District of Columbia rather than my personal experience, as I’ve not had all them.

Next in the series of Barred in DC food guides is where to get best lasagna in DC. Again, most of these guides are generated  from an open Twitter threads-they are based on what my Twitter followers believe is the best in the District of Columbia rather than my personal experience, as I’ve not had all them (my expertise would be useless as I’m not a food critic). See original lasagna thread and a bonus poll.

[Up-to-date as of July 5, 2021)
Next in the series of Barred in DC food guides is a 3-for-1 combining fried potato-specifically French fries as well as tater tots and poutine in DC. Again, most of these guides are generated  from an open Twitter threads-they are based on what my Twitter followers believe is the best in the District of Columbia rather than my personal experience, as I’ve not had all them (my expertise would be useless as I’m not a food critic). See original French Fries Tater Tots and Poutine Twitter threads.

(ketchup general available or provided when nothing is mentioned, and often in other situations)

The Best of the Best

After Horace & Dickie’s closed their longtime H Street location earlier this year, there have been questions who will be the iconic fried fish joint left in DC. I asked Barred in DCs Twitter followers for best fried fish in DC and here were their responses.