Bardo River Brewery [25 Potomac Ave. SE, basically near East Potomac & Q St SE, Facebook, Twitter], the massive brewery and beer garden located between Nationals Park and the Anacostia River, (soft-) opened this weekend to large crowds of humans and dogs after a lengthy and bruising battle with the DC government (ABRA, MPD (DC police), the Mayor’s office), the local ANC, and the Nationals.

Barred in DC stopped by on the opening day Saturday, along with around 150 people and 25 dogs. If you ever frequented the now-shuttered Trinidad brewpub on Bladensburg, the vibe is roughly similar, though less post-apocalyptic; there’s still nothing else like it in DC. The entrance, about a 10 minute walk around the stadium from the Navy Yard Metro (Ballpark side) stop, is on Potomac Ave. SE, directly across the street from where the Nationals play. Unlike the old space, which was mostly grass and weeds, Bardo’s patrons walk on gravel paths and an enormous amount of wood chips. 50 or more wood tables are concentrated along the river and under the Frederick Douglass Memorial Bridge (S. Capitol Street), while there’s plenty of open space where folks let their dogs roam (right now dogs are allowed to be off-leash throughout, so be forewarned or heartened; Bardo says that a separate off-leash space is forthcoming). Also underneath the bridge are numerous cornhole sets and a sweet couch. The bathrooms are set up 30 feet behind the bar in separate shipping containers; the men’s urinals were repurposed kegs.

As for the beer line-up, Bardo offered 9 beers on Saturday (IPA, ESB, Brown Ale, Sour Mash, Porter, Stout, Imperial Stout, and Barleywine) mostly priced at $7/pint with a good deal at $21/pitcher. No flights are offered as of now, though bartenders were happy to provide a taste to sample.

Right now, Bardo is in soft-open phase, opening from 1-10p on selected weekends as long as the weather cooperates. Once April rolls around, expect it to be open till midnight (the latest it’s permitted to be open) and even more full (750 people is the capacity) before or after baseball games.

You guys are pretty spot on. Yes, the area up by the entrance will be completely enclosed and used as an off leash dog area. Dogs will be permitted in other areas of the brewgarden only if they are on leash (leash rules will be waived until the last piece of fencing is installed in the dog park).

There will also be a separate fenced in area at the east end of the riverfront seating with a sandbox designed to serve as a kids playground.

The table tops, the bar, all partitions, awnings, sings, fence posts and totem poles are made from reclaimed wood. The wood was acquired from several tree companies who have been dumping logs (and mulch) on site for over a year. Bardo milled most of the wood into 1 inch, 2 inch and 3 inch thick boards which have been used in the construction of the brewgarden. An upcycle you could say.

Additionally, the object across from the dog park is indeed a greenhouse. A local company is using it to grow seedlings for use in their rooftop farming.

Thanks to all who came by to check it out last weekend. Everybody from the neighborhood was very welcoming. 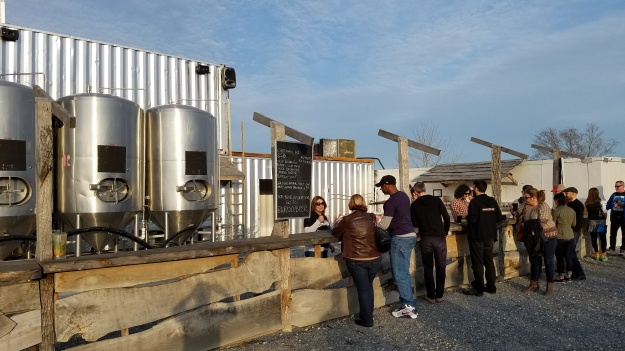 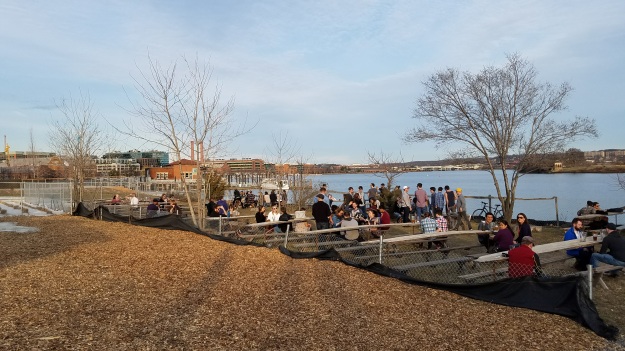