Barred in DC Wishes This Sign Was Ubiquitous in DC

Jack Rose is Barred in DC’s favorite non-dive bar in DC. Or, should I say, was my favorite. Since I made this pronouncement in 2013 (and repeated it to countless friends and readers who asked for opinions), I’ve made many trips to Jack Rose’s second floor terrace and come away annoyed much of the time, reeking of smoke. The smell of cigars and cigarettes being smoked is most acute when the ostensibly open-air terrace is enclosed by a retractable roof and window panels for cold or wet weather. Others have made this complaint, including one of DC’s most notable Twitter-lebrities, and around 35 or so Yelp reviewers.

Jack Rose is certainly not the only offender; several other popular bars, including Barred in DC picks Red Derby and Rock and Roll Hotel, as well as Hilton brothers’ spots El Rey, The Brixton, and Marvin, are singled out by many for lessening the experience with second-hand smoke exposure, particularly when the outdoor space is enclosed or mostly covered. Based on Barred in DC’s quick-and-dirty analysis, the majority of DC’s rooftops, decks, and beer gardens allow smoking, though Sauf Haus, Dacha Beer Garden, and Bar Deco are notable smoke-free zones. The H Street Country Club has a happy medium, reserving the majority of its outdoor deck for non-smokers with a separate uncovered space well away from most of the deck allowing smoking.

To the surprise of many, although smoking has been prohibited in “enclosed areas” at bars since January 2007, outdoor areas are specifically exempted from the ban by DC law and regulation if permitted by the bar’s lease or contract.  The law defines “enclosed area” as

all the space between a floor and ceiling that is enclosed on all sides by solid walls or windows or doors, exclusive of doorways, that extend from the floor to the ceiling.

DC regulations further clarify that a space counts as an enclosed area “regardless of whether windows or doors are open.”

DC is not alone in permitting smoking on patios and roofdecks. Earlier this week, Rockville became only the second jurisdiction in the DC area to ban this practice (followed by the exurb/rural town in Southern Maryland, La Plata). Nationwide, most permit this but notable jurisdictions that ban outdoor smoking include Hawaii (since 2006), Maine (2009), Michigan (2010), and Washington state (2005), and the cities of Boston (2008) and Philadelphia (2007). Many of these jurisdictions allow smoking on patio/bars when no food/beer is being served by the establishment on them if they’re more than a certain # of feet from any window/door.

Bars like Jack Rose and El Rey have continued to permit smoking even when the space is fully or essentially enclosed, which exacerbates the second-hand smoke danger and makes a mockery of DC’s laws designed to protect the public and employees. However, this definition of “enclosed area” does not squarely exclude enclosed rooftops/patios, and besides, since neither the law nor regulation contains a definition of “outdoor area,” DC’s Department of Health should still have the wiggle room to clearly establish that these loophole rooftop smoke boxes are not OK. Better still would be DC Council to follow Rockville’s lead and ban smoking on outdoor patios. This would be a popular move; a strong majority of Barred in DC poll respondents stated smoking on patios was terrible and 80% said allowing smoking on patios/decks lessened the likelihood they would visit a spot. Despite some claims to the contrary, it seems that second-hand smoke is a problem outdoors.

Aside from outdoor areas, so-called tobacco bars, which generate 10% of its onsite sales from tobacco products, are exempt from the indoor smoking ban. Tobacco bars must apply for an exemption from DC; in 2013 DC announced for second time that the ban applied to hookah shisha.  Currently only cigar bars Civil Lounge LLC, Ozio, and Shelly’s and hookah spots Gazuza, Chi Cha Lounge, Queens Café, and Soussi are officially exempt (yup, you’re welcome to narc on your local hated hookah spot that is not on this list). Interestingly, Ozio, which has a rooftop bar, allows cigar smoking in its cigar lounge but prohibits smoking on its deck.

I understand why a spot like Jack Rose would want to permit smoking; cigar smoking traditionally goes hand in hand with bourbon tasting, and the bar is one of the world’s best-stocked bourbon bars. But the expansive terrace isn’t the only outdoor space in Jack Rose; the small balcony fronting 18th Street or the Tiki Bar in the back would be better (Jack Rose did not return a request for comment through its PR representative). It’s also not hard to figure out why so many DC bars keep letting folks light up outside, many of these spots literally have lines of people waiting to get in every weekend night and are at capacity inside. Allowing smoking on premises allows a bar’s employees to monitor/patrol its patrons better and bargoers can continue drinking and purchasing beverages; neighbors might be more pleased that cigarette butts are not being discarded on the sidewalk or on their front step. Still, people always adapt (remember the naysayers back in 2006 when the ban was imposed indoors) and second-hand smoke is terrible. Do we really want to be behind Boston and Philadelphia (and Rockville?) 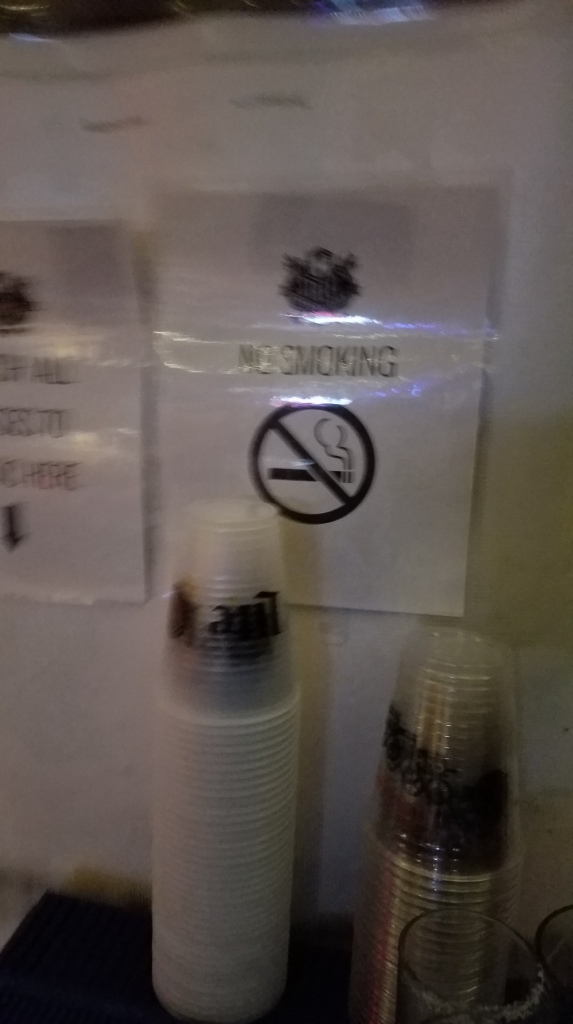