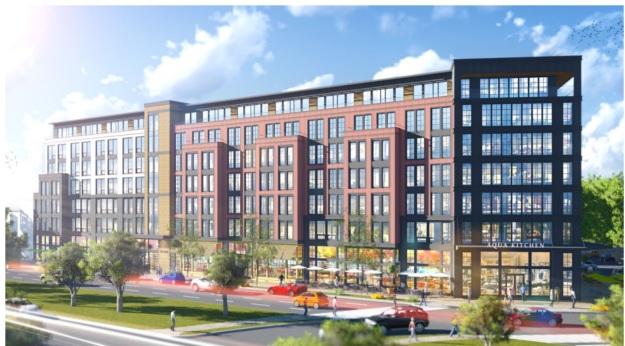 [Note: The headline and post have been revised on 6/26]
[8/23 Note: I’ve updated the headline to note that this project has been confirmed to open in 2019 and 2020. See if this story warranted retraction by reading the Washington City Paper, Washingtonian, and Eater. Clearly, NRG doesn’t want people to think it’s “like Union Market,” but tough, people are going to anyways.]

Tentative plans have emerged in which the Neighborhood Restaurant Group would develop an ambitious multi-concept establishment in Hill East across the street from the Potomac Avenue Metro Station, Barred in DC has learned, although no deal has been officially signed. Described by one source familiar with the tentative plans as akin to a “smaller scale Union Market,” if it comes to fruition, it would occupy 13,000 square feet on the first floor of the soon-to-be-under-construction 1401 Pennsylvania Ave. SE residential building (7 floors with around 170 apartments) being constructed by CAS Riegler.

The tentative plans reportedly include the following concepts in the space (I told you it was ambitious):

For comparison, the possible space is a little more than half the size of Union Market, which is around 25,000 square feet. As the building just recently held its official groundbreaking, don’t expect any new establishment to open until late 2019 or early 2020 and obviously, plans may change drastically from now until then. Currently, the location is a NY Pizza and parking lot, and about 300 feet from the Potomac Ave. Metro entrance and a Harris Teeter.

NRG has almost 20 different businesses under its umbrella throughout the DMV region, most notably Churchkey and the Bluejacket Brewery, as well as Birch & Barley, The Partisan, Red Apron Butcher, Iron Gate, Eatbar, Red Apron Burger Bar, The Sovereign, and Hazel in DC.

NRG representatives, including beer director Greg Engert, were present at the groundbreaking on Saturday, June 24th, but NRG and CAS Riegler representatives took pains to not confirm the nature of the project or that NRG is even involved.

NRG’s PR rep sent Barred in DC a statement the morning of 6/26 asking for a retraction, stating:

I wanted to let you know that NRG has no deal with Cas Riegler and no plans to open a “mini Union Market.” As such, I would like a retraction on the post that ran this weekend.

You are welcome to reach out to me in the future should you ever get a tip about NRG that you’d like to confirm, but in the meantime, if you’d like to reach out to Kevin Riegler to confirm that NRG has in fact not finalized a deal to work on this project, you can reach him [at his email address]
We’re happy to keep you updated if something does come to fruition. Thank you in advance for your understanding.

Notably, as part of the building developer’s agreement with the neighborhood and DC, CAS Riegler has agreed to spend around $50,000 to beautify the metro entrance plaza, $95,000 to improve 2 local playgrounds, and $20,000 for improved security for nearby Potomac Gardens housing project as well as $5,000 for neighborhood trees.