On Friday, DC’s government released a joint publication of the Mayor’s office as well as DC’s Department of Transportation (DDOT) and Department of Health (DC Health), entitled Reimagining Outdoor Space: Restaurants and Retail, Guidelines for Expanded and New Outdoor Seating. A summary fact sheet was also released. If you are a DC restaurant/bar, member of an ANC, or head up a BID/Main Street, I strongly encourage you to review the entire 18 page document closely. Although the materials suggest that they are for Phase One reopening, expect that the requirements and flexibilities to be in effect for Phases Two and Three (i.e., until the public health emergency ends).

The biggest things that restaurants should know is that 1) sidewalk cafes are required to have 6 feet between backs of chairs of different tables (Not just tables) 2) 4 feet buffer between tables/chairs and the pedestrian path on the sidewalk 3) 4 feet buffer between adjacent business frontage 4) Parking space outdoor dining will require ADA ramps 5) ANCs/Main Streets/BIDs can apply to close whole parking on one or two sides of street block, traffic lanes, whole street, or alley.

Here’s a summary of the provisions:

Restaurants Can Register/Apply On their Own to Use:

Unclear what happens if one of these groups support closure but another don’t. But based on my reporting, it appears that all of the groups applicable to a certain space have to at least not object.

All new outdoor spaces will require the businesses using it to provide proof of insurance that names DC as certificate holder/additional insured with certain limits. This requirement makes sense and is consistent with existing rules for existing sidewalk cafes. 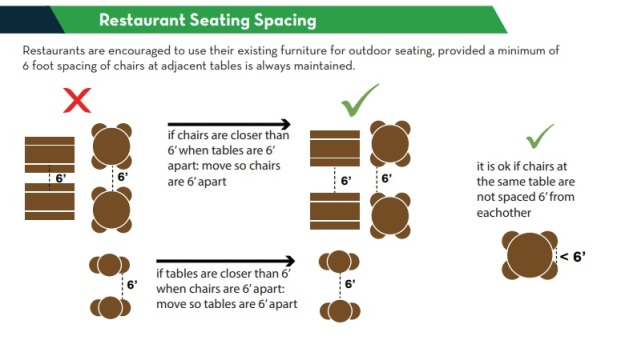 The following “buffers” are required for all new/existing outdoor seating in public space:

The 6 feet chair rule and the 4 feet buffer rule will reduce the seating capacity of many spots that have already opened.

Parklets in this context are the use of on-street parking spaces/curb lanes for outdoor dining.

In normal times they are present in some places in DC (but not for dining); restrictions in normal times include not permitted in the first and last spaces of a block (unless there’s a curb bump-out) and are not allowed on any road that has a speed limit higher than 25 MPH (e.g major roads like Pennsylvania Ave), but it’s not clear whether those restrictions apply now.

A four foot buffer (comprising of 2 feet of open space and a 2 feet wide physical barrier) separates the parklet from traffic lanes. If one space is used, the area available for tables would be roughly 6 feet wide by 12 or 16 feet long (it’s unclear the buffer size between next parking space). Two parking spaces would increase the area more than double since no buffer needed between the spaces.

The 2 feet wide physical barrier normally is something more substantial than planters and are between 36-42 inches high. Restaurants will be permitted to add umbrellas and other canopies (so long as not above 7 feet high). A platform will not be required to be built to put the outdoor space level with a sidewalk but a movable ADA-accessible ramp will be required to connect to the sidewalk.

It’s unclear precisely what, but it appears that restaurants using parklets will have to install some sort of angled-barrier between it and the next parking spot to protect the users of the dining space from lousy drivers. The diagram listed above shows a water-filled barrier (i.e. barrels), but DDOT may allow other types of barriers or even just require the restaurant to park a car in adjacent space

Although streateries should really count individual parklets, DC seems to use the term to encompass more extensive outdoor dining on the street. These are the types of streateries that can be requested by an ANC, Main Street, or BID: 1) block-long parking spaces (full-time) 2) 1-2 traffic lane closures (full-time) 3) whole street closures. These will only be allowed as follows:

Contrary to some of the reactions to my reporting previously, these are not intended to be “festival” one-off but implemented either full time or on a regular weekly basis.

If DDOT approves the closure of  curb lane or 1-2 (but not all) traffic lanes on a particular block, this closure is full time 24/7, not just at night and weekends. These partial closures are not allowed in blocks that have a fire or police station or roads that have 30 MPH speed limit or higher (Pennsylvania Ave. SE for instance).

Full closures of street blocks (already contemplated in Adams Morgan, Eastern Market, Barracks Row, and Upshur Street in Petworth) will allow seating in the street (both parking and traffic lanes) with no vehicle traffic at all.

Just like current street closure rules for festivals and block parties, however, there must be a 20 foot wide zone (about 2 lanes wide) in the middle of the street where no tables, chairs, or other structures can be placed to allow for fire trucks and other emergency vehicles to pass through or enter. When there’s not an emergency, however, people will generally be allowed to walk (and scoot or bike, if not crowded) around that empty space, providing ideally some area for social distancing. Significantly, at the end of each side of this 20 foot wide fire zone must be a big truck (often DPW snowplow trucks) with a driver inside to  protect the zone from regular traffic as well as allow emergency vehicles inside.

These full street closures will be either full-time (24/7) or part-time: Thu/Fri 4-11p and basically all day Saturday and Sunday (10a Sat-10p Sun). However, because restaurants may be required to bring in furniture one hour before end of block closure, if implemented as written it would means the restaurants’ outdoor street seating would actually close at 10p Th-Fri, possibly midnight Sat, and 9p Sun. This may have a conflict with the current Adams Morgan plans for closing a block of 18th St every day except midnight-11a.

There is contradictory language in the guide whether full street closures are allowed on streets that have buses. Some language says explicitly they are not permitted on such streets but another bullet point implies that organizers can consider rerouting buses (Since Streetcar can’t be rerouted, there is almost no chance that this will be implemented on H Street).

ANC’s will have a chance to weigh in on any full block closures.

These dining plazas can be requested in either “wide public spaces areas” or alleys behind restaurants. These areas can be for one specific eatery, or several of them including food trucks and sidewalk vendors.

The wide public spaces areas would be set up like large sidewalk cafes.

Roughly 30 foot wide alleys not needed for circulation (i.e., if there’s another exit available) could be closed, but they would be set up like full street closures, with a 20 foot wide fire lane as well as big trucks protecting such area. There would be a long loading/pick-up/drop-off zone on the street adjacent to the alley.